Big-time screening alert! Josef von Sternberg's The Salvation Hunters (1925) will be screening at UCLA this Saturday March 14 as part of their 14th Festival of Preservation. 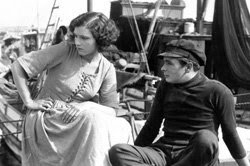 Preservation funded by The Stanford Theatre Foundation
THE SALVATION HUNTERS
(1925) Directed by Josef von Sternberg
Josef von Sternberg's first film--shot for less than $4,800 on location in San Pedro, Chinatown and the San Fernando Valley--was possibly Hollywood's first "independent" production. The gritty realism of its locations, the lack of artifice in its story and the lower depths of its characters shocked audiences and the industry alike. The film remains thoroughly modern. Sternberg's images thrive on composition and stasis. His ending resolves nothing and yet everything is different. The Salvation Hunters made a star not only of Sternberg, but also of Georgia Hale, who would play opposite Chaplin in The Gold Rush (1925).

Oil was produced by a Los Angeles collective of amateur filmmakers, called "Artkino," who here attempted a lyric documentary from the point of view of the oil itself.